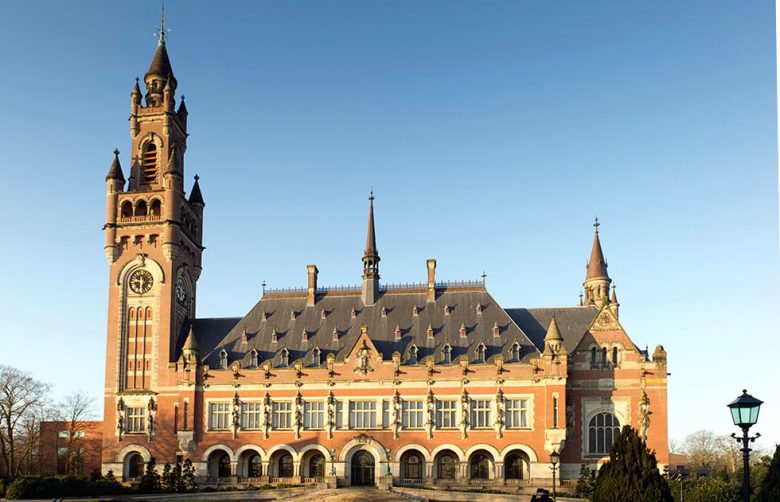 March 17, 2022A-NewsComments Off on Ukraine institutes proceedings against the Russian Federation and requests International Court of Justice to indicate provisional measures

Unless you have opted to live in a cave (which to be clear we have nothing against considering the insane world we are living in), you are already following the news of Russia’s invasion of Ukraine (or so-called special military operation as Russia puts it!). There is of course a lot to discuss and have an opinion on what has been happening between the two countries for the purpose of which there are far more eligible people but, in this News & Analysis we are having a look at Ukraine’s latest legal actions before the International Court of Justice (“ICJ” or “Court”) which is the principal judicial organ of the United Nations.

On 27 February 2022, Ukraine represented by Covington & Burling law firm a prominent Washington, D.C.-based firm, filed an application instituting proceeding against The Russian Federation (“Russia”) before ICJ in respect of “the interpretation, application and fulfilment of the 1948 Convention on the Prevention and Punishment of the Crime of Genocide” (“Genocide Convention”). On the same day, Ukraine filed an application to the ICJ requesting provisional measures pursuant to Article 41 of the Statute of the Court and Articles 73, 74 and 75 of the Rules of Court, in which it requests the Court to indicate provisional measures “in order to prevent irreparable prejudice to the rights of Ukraine and its people and to avoid aggravating or extending the dispute between the parties under the Genocide Convention”. Ukraine seeks to ground the Court’s jurisdiction on Article 36(1) of the ICJ Statute and Article IX of the Genocide Convention to which both states are parties.

According to Ukraine’s application, Russia “has falsely claimed that acts of genocide have occurred in the Luhansk and Donetsk oblasts of Ukraine, and on that basis recognized the so-called ‘Donetsk People’s Republic’ and ‘Luhansk People’s Republic,’ and then declared and implemented a ‘special military operation’ against Ukraine with the express purpose of preventing and punishing purported acts of genocide that have no basis in fact”. Ukraine argues that, “on the basis of this false allegation, Russia is now engaged in a military invasion of Ukraine involving grave and widespread violations of the human rights of the Ukrainian people”.

Accordingly, Ukraine’s request for relief asks the ICJ to adjudge and declare the following: (i) that “no acts of genocide, as defined by Article III of the Genocide Convention, have been committed in the Luhansk and Donetsk oblasts of Ukraine”; (ii) that Russia “cannot lawfully take any action under the Genocide Convention in or against Ukraine aimed at preventing or punishing an alleged genocide, on the basis of its false claims of genocide in the Luhansk and Donetsk oblasts of Ukraine”; and (iii) that Russia’s “recognition of the independence of the so-called ‘Donetsk People’s Republic’ and ‘Luhansk People’s Republic’ on 22 February 2022” and Russia’s “special military operation’ on and after 24 February 2022” have “no basis” in the Genocide Convention. Ukraine further requests that the Court (iv) require Russia to “provide assurances and guarantees of non-repetition that it will not take any unlawful measures in and against Ukraine, including the use of force”, on the basis of “its false claim of genocide”; and (v) “order full reparation for all damage caused” by Russia “as a consequence of any actions taken on the basis of Russia’s false claim of genocide”.

In its application for provisional measures, Ukraine requests the following: (i) that Russia “immediately suspend the military operations commenced on 24 February 2022 that have as their stated purpose and objective the prevention and punishment of a claimed genocide in the Luhansk and Donetsk oblasts of Ukraine”; (ii) that Russia “immediately ensure that any military or irregular armed units which may be directed or supported by it, as well as any organizations and persons which may be subject to its control, direction or influence, take no steps in furtherance of the military operations which have as their stated purpose and objective preventing or punishing Ukraine for committing genocide”; (iii) that Russia “refrain from any action and shall provide assurances that no action is taken that may aggravate or extend the dispute”; and (iv) that Russia “provide a report to the Court on measures taken to implement” a provisional measures ruling “one week after such Order and then on a regular basis to be fixed by the Court”.

While cases before the highest U.N. court generally take years to go to trial, but hearings on provisional measures have in the past been held within weeks of a filing and in the present case, the hearing were scheduled for 07 and 08 March for presenting oral arguments by Ukraine and Russia respectively. However, Russia raising the lack of jurisdiction of ICJ refrained from participating in the hearing while oral submissions of Ukraine were heard at 07 March hearing. At the said hearing judges did not consider questions of jurisdiction or of the merits of Ukraine’s case, but only whether the matter was so urgent they had to order some immediate measure in the interests of justice before the case can be heard in full.

This case follows three other (pending) proceedings brought by Ukraine in relation to events in the Crimea region in 2014. Two cases are arbitrations under Annex VII of United Nations Convention on the Law of the Sea (“UNCLOS”), while the third is before the ICJ. The Court in 2019 found that it had jurisdiction to hear Ukraine’s claims of Russian violations of international law related to racial discrimination and the financing of terrorism in Crimea. That case is pending.

ICJ subsequently announced that the Court’s decision on the Request for the indication of provisional measures submitted by Ukraine will be delivered at a public sitting pursuant to which it was announced on 14 March that the Court will deliver its Order on Wednesday 16 March 2022. Yesterday ICJ delivered its order which has binding effect indicating the following provisional measures:

While the ICJ is the United Nations’ highest court and its rulings are binding, states including Russia have ignored them in the past.

It seems that after long wait for the pandemic to be finally over now prayers are in place not to find ourselves in the middle of a world-wide war. May peace prevail.